The Foundation recognized several members of the Burleson Police Department for exceptional service at the August 2018 monthly meeting. 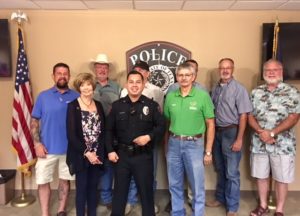 Officer Efrain Balderrama was honored for his efforts to intervene when a citizen was considering suicide. Officer Balderrama had completed his shift and was traveling home when he saw a man straddling the concrete barrier on a high bridge in South Fort Worth. He stopped and after speaking with the man, was able to convince him to get off the bridge and go to the hospital for help. Great job Efrain! 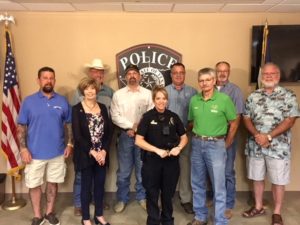 Sergeant Shelly Henken was recognized for her participation in the arrest of burglary of motor vehicle suspects while working the night shift. We appreciate officers patrolling at night while we sleep! 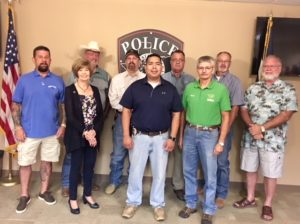 Officer Harold Chou was patrolling a neighborhood when he located suspects that had just burglarized some vehicles. He coordinated with other officers, made a traffic stop and arrested three suspects. His efforts led to the recovery of a handgun that had been stolen from one of the vehicles! 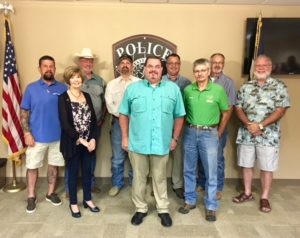 The Burleson Police Department was recently reaccredited through the Commission on Accreditation for Law Enforcement Agencies. BPD was the first department in Texas to be recognized, dating back to 1987. Mike Alley, pictured in front center, serves as the Accreditation Manager for BPD and his efforts led to our first recognition with excellence! 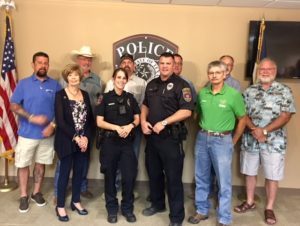 Officers Rachel Ayuso, Jason Tauch (pictured) and Hawk Murray (not pictured) were dispatched to the scene of a large fight in a parking lot. However, when they arrived they learned this was a group of high school kids that organized a late football game to escape the heat. Instead of breaking up the game, these officers “lit” up the field with their spot lights, played music and built some great friends! 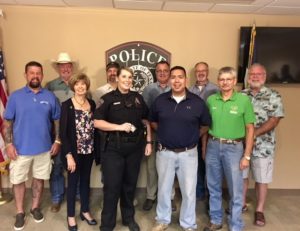 Officers Whitney Meredith, Harold Chou (pictured), and Officer Joshua Lott (not pictured) were dispatched to a violent scene where they located a person that had been stabbed multiple times. Without hesitation officers quickly began first aid on the victim who was bleeding profusely. Their quick action to stop the bleeding allowed the victim to be transported to the hospital for medical care. 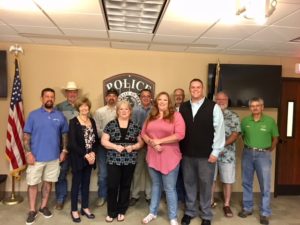 Communications staff acted quickly after receiving a 911 call about a stabbing at a local alcohol establishment when they learned the victim was in serious condition. Pictured are Wylene Landrum, Rachel Cox and Chad Daniel who were all recognized by the Foundation for their quick actions to dispatch officers, Fire and EMS to ensure the victims medical needs were a priority. Thanks to all of you for being our citizens and officers lifeline!