Officer Chris Price is described as a highly motivated officer that puts his team before himself. He often volunteers to work on his days off when needed and shows a passion for his duties. He seeks feedback from peers and supervisors on how he can better himself and appreciates their guidance. He continually seeks to improve his investigative skills and report writing.

Officer Price is highly productive, having over eighty-five (85) arrests, of which eighteen (18) were DWI’s. He conducted over one thousand (1,000) traffic stops that led to the seizure of illegal narcotics and warrant arrests. Many of his arrests were “on-view” arrests, meaning his proactive policing methods proved to be very productive. Chris has a positive attitude and a strong work ethic that makes him a valuable team member. 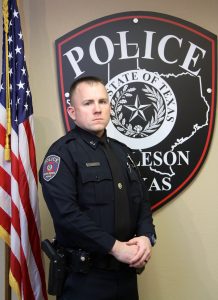