This year’s Officer of the Year is a two year veteran of the Burleson Police Department. Although he hasn’t been an officer long, he has engrained himself into the culture of the department through his dedication to service and commitment to the Burleson community. He quickly gained the respect and trust of his peers and has been selected as a SWAT team member and a Field Training Officer. He is currently assigned to the midnight patrol shift.

Officer Tauch responded to a suicidal call where the person had cut themself with a knife and was in need of immediate medical assistance for the serious injury. He persuaded the person to drop the knife but had to chase him down after he fled the scene on foot. After catching the subject and calling for an ambulance, he was transported to the hospital for medical assistance.

In another call, he was able to apprehend a suspect that fled from the scene of the burglary.

This officer is described by his supervisor as having a positive attitude, always arrives to work on time and rarely calls off. He cares about his co-workers and is always willing to help. He demonstrates compassion, self-control, and has natural leadership qualities.

He is a productive employee, making 11 felony and 15 misdemeanor arrests. 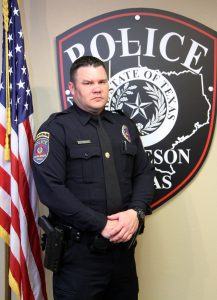